Conceptual design
Project Overview
Laff is a concept for an app that helps users find jokes based on specific key words determined by the user. The goal of the app is for users to broaden their comedic tastes, while also contributing to the jokes people can see. The app also features a social platform where users can follow others and rate their jokes.
My Contributions
User interviews, How might we's, Use cases, Requirements gathering, Wireframes, Design system documentation, User testing, Prototypes
Outcome
As passionate as I was to this topic, at the end of the day, its meantto service much more than just me. Getting the insight from prospectiveusers/passengers allowed me to understand what common issuesare currently in place with how they use buses, and what could be donebetter. People really are the most valuable resource.

How might people use their smartphone to help them expand their sense of humour?

I wanted to get deeper insights as to what my target user was looking for in this app to make them funnier, so I inquired more about their expectations of what this app could be, as well as questions about the kind of comedy they enjoy. I wanted to understand what they find funny, how they go about finding things that they find funny, how their sense of humour is, and how they would plan to use this app.

To obtain these insights, I conducted a semi-structured, 15 minute user interview. This interview provided me with valuable knowledge about how my target user currently tries to become funnier, as well as their expectations from an application perspective. I highlighted the answers that stood out the most to me.

I feel like I could use it anytime I have my phone. Anytime I think of a joke popping up, or I’m planning something. Like if I’m going to Louisiana and I want to make a joke, I can think of it ahead of time.

I feel like there’s a lot of situations where um, there’s just a dominant thing going on ... you can make a joke based on that. It’s situational, it’s comedic. Or you’re in a discussion with friends that you think of a random pun and be more quick-witted.

I would love [the app feeding me a new joke daily]. My horoscope app gives me a quick update on what it thinks is going on in my life and I love it. Especially for the holidays.

I feel like that [the option for users to submit their jokes] could be a separate thing, but I don’t think the app should solely be based on that, I feel like it should have a database. I think the jokes should also have a flag option in case people feel it’s offensive, and add “what don’t they like about the joke”.

I want to make a joke on a certain topic, but there are different words related to the same thing, like high way, freeway, and road. What I think the app should have is like when you search corn, it’ll give you results for maize, like a-maize-ing. I would just like google synonyms for the word.

A social network app that helps users find community-created jokes based on specific keywords determined by the user.

After understanding them better from my interview, I wanted to lay down a foundation of what I thought the app could do based on their needs. To build my requirements, I adapted aspects of Google’s Design Sprint to identify key points from my interview and explore ways to implement features based on those key takeaways.This exercise spawned several how might we statements, and only a select few are being presented.

How might we:
Cater the possibilities to the user’s sense of humour?

How might we:
Encourage users to interact with the joke of the day?

How might we:
Incorporate different styles of jokes in this app?

How might we:
Promote user-made jokes to new audiences of the genre?

How might we:
Promote user-made jokes to new audiences of the genre?

Defining the use cases

Using the information obtained from my user interview and then explored through the How Might We questions, I drafted 5 use cases I wanted to potentially explore with my app. These use cases went over the primary basic functions I envisioned the app executing. which included:

Signing up for the app and going through on-boarding

Posting your own joke

Saving jokes to your profile

Following other users and getting updates on their jokes

Interacting with the joke of the day

To the drawing board

After identifying the key use cases I wanted to focus on in my prototype, I went and sketched low-fidelity. These wireframes were a basic mock-up of how I wanted to app to look and function, as well as to throw preliminary concepts onto the board and see how they would work. They were purely an exploration of a variety of layouts I considered adapting for my app. 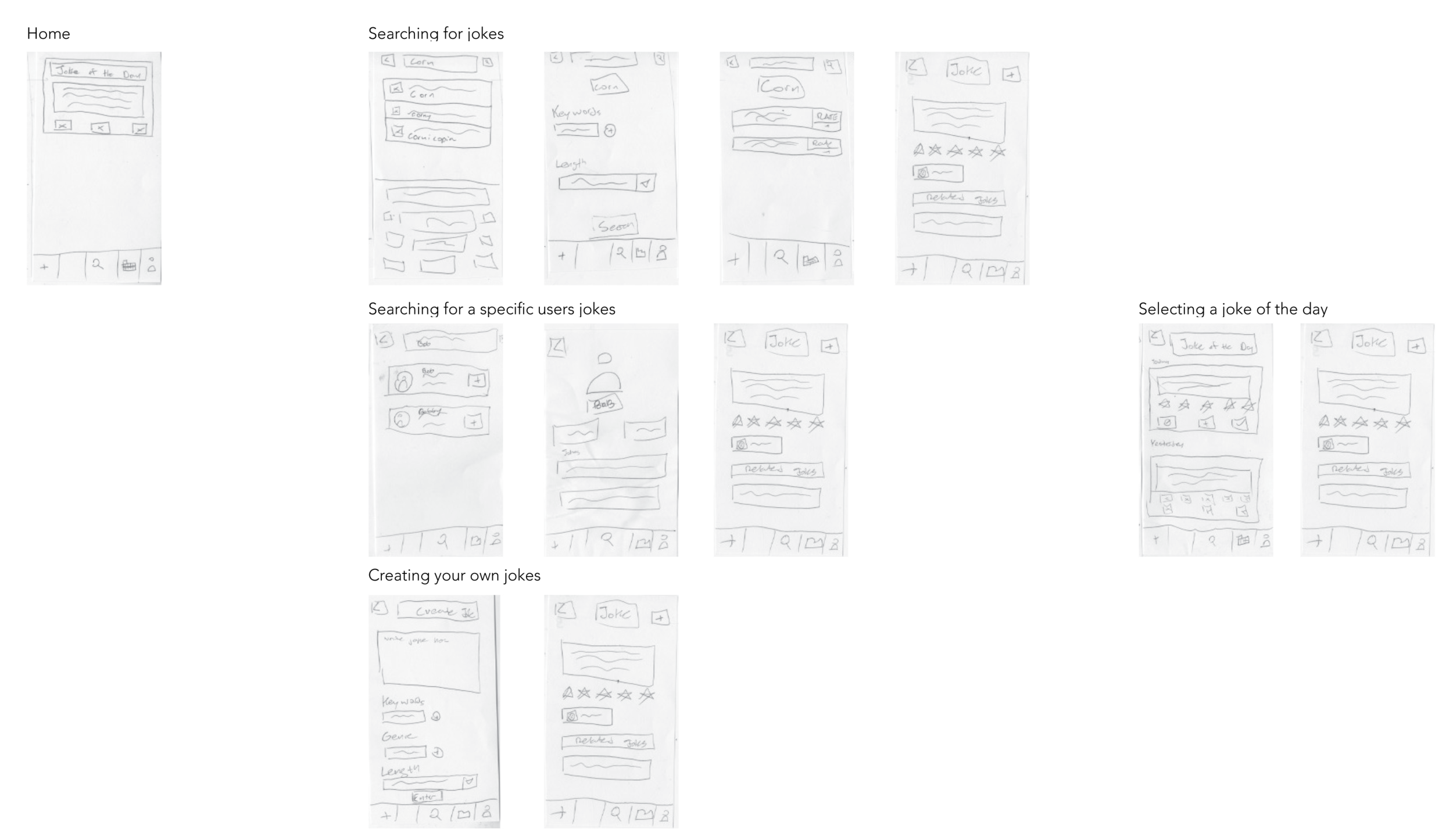 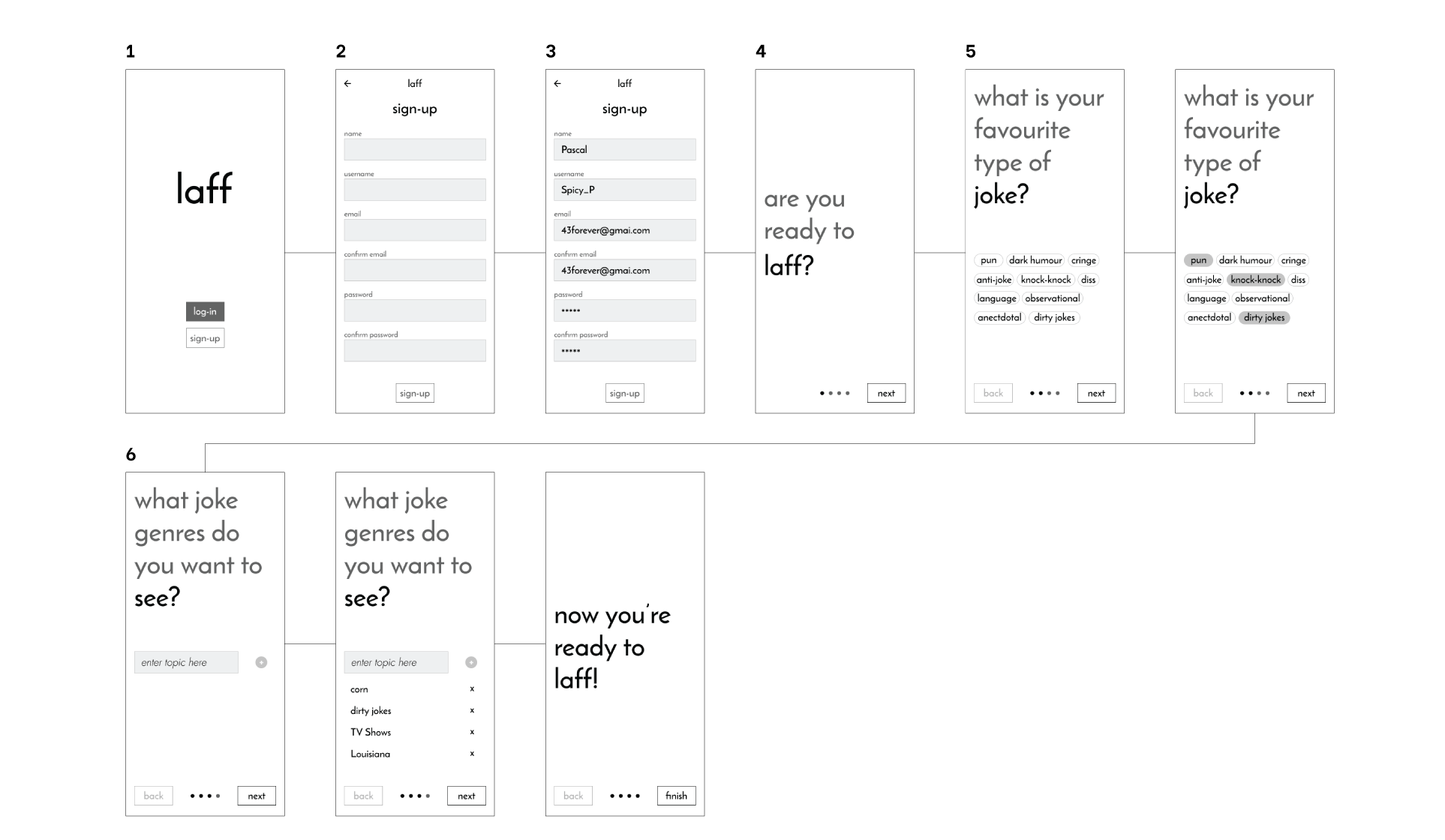 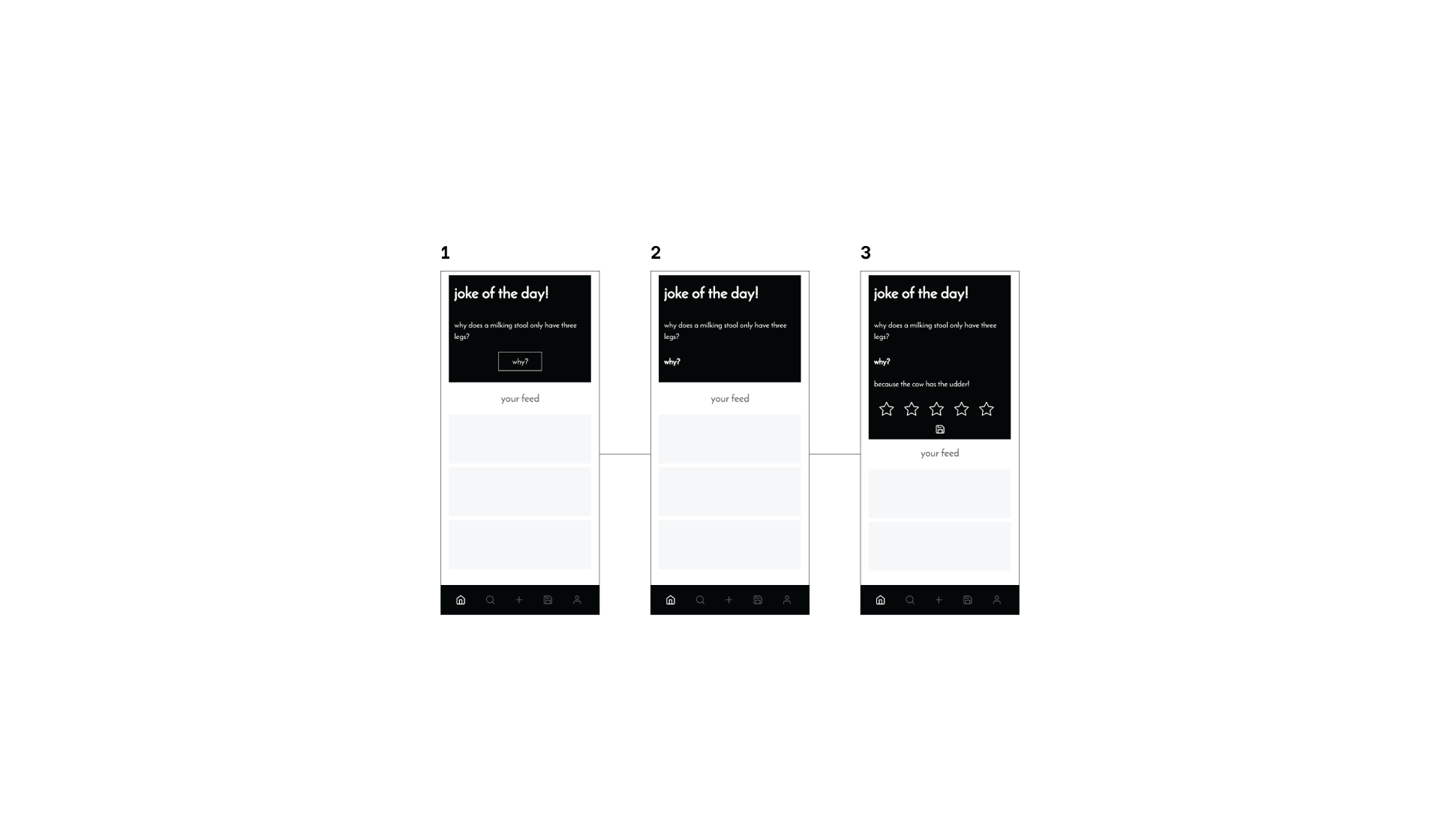 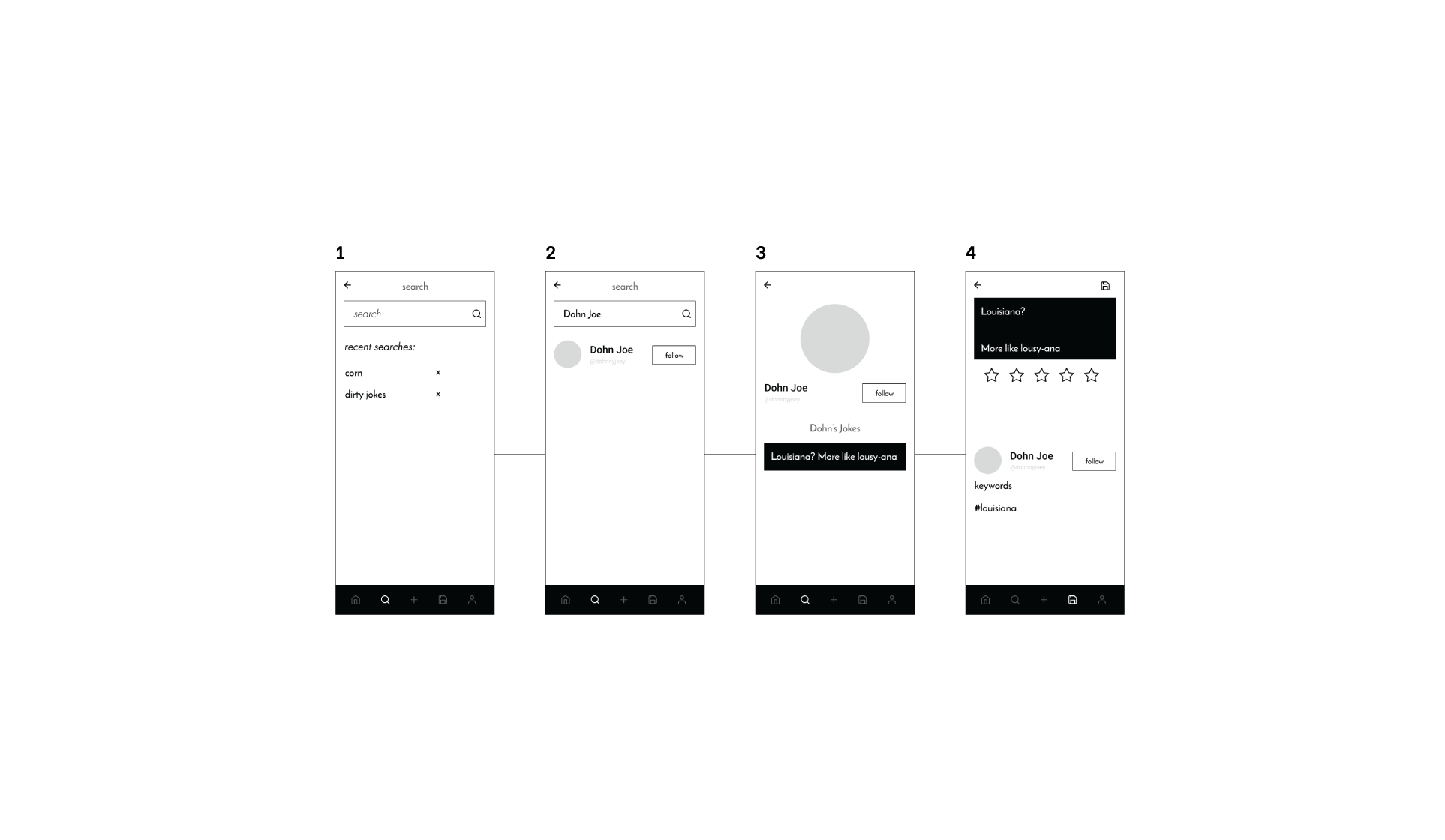 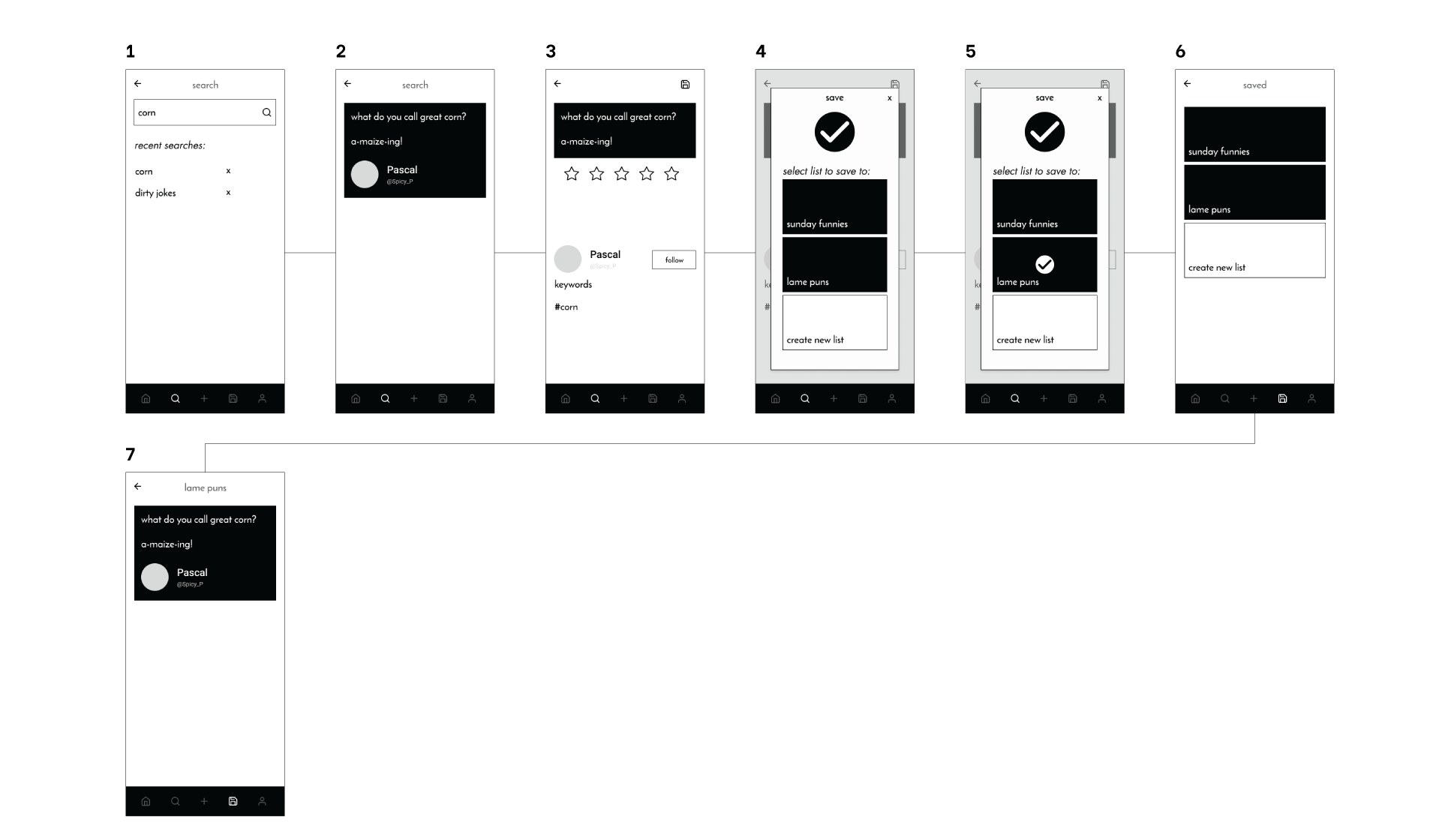 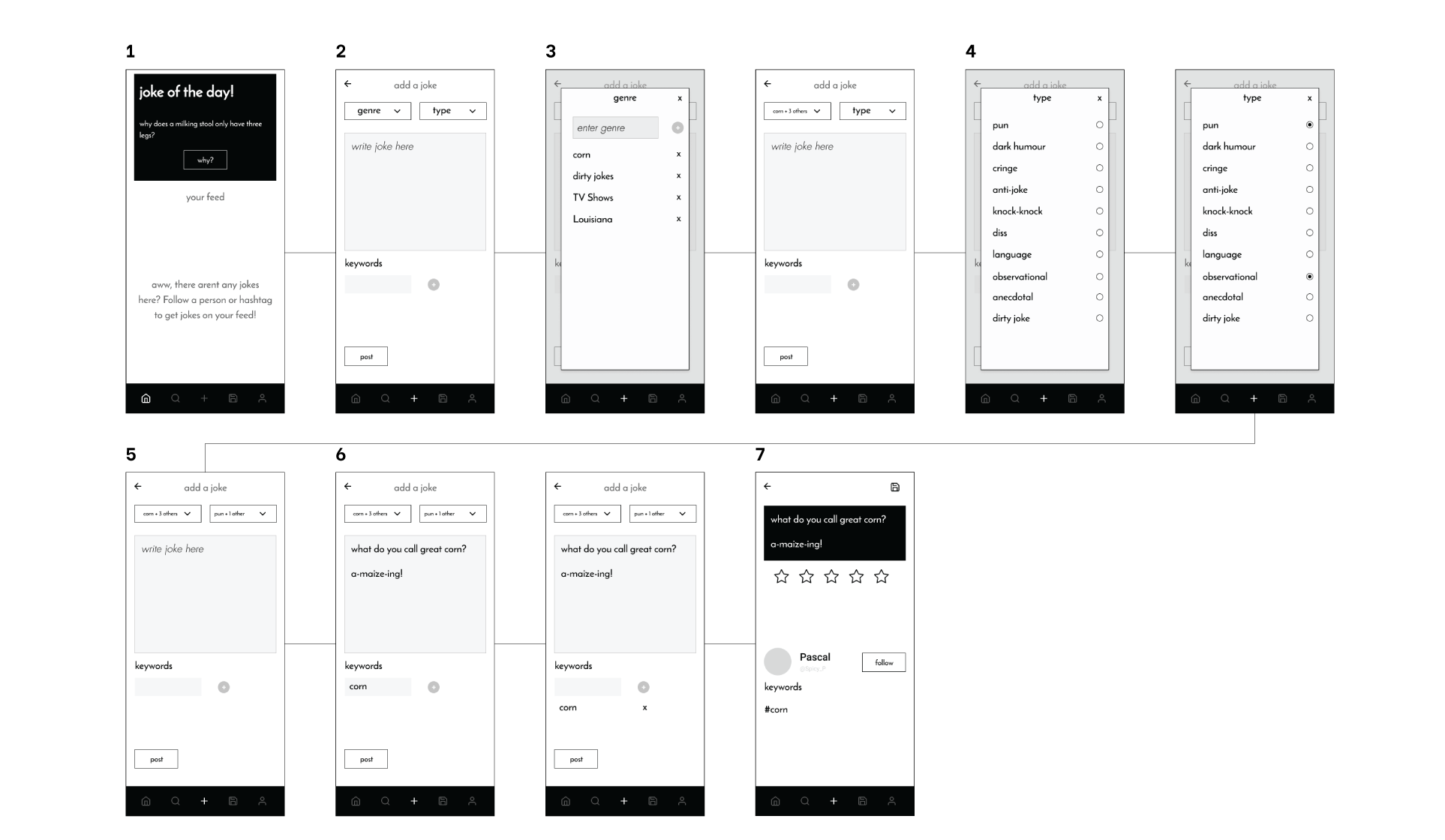 To create a passenger information screen that effectively communicates the TTC bus service.

Using the DECIDE framework, I planned my overall goals for my usability test to draft questions. My goal was to run a task-driven user test with paper prototypes.

I tested my app to understand the usability of my app’s interface, and looked to investigate the strength of the social platform within the app by conducting a quick post-test interview. 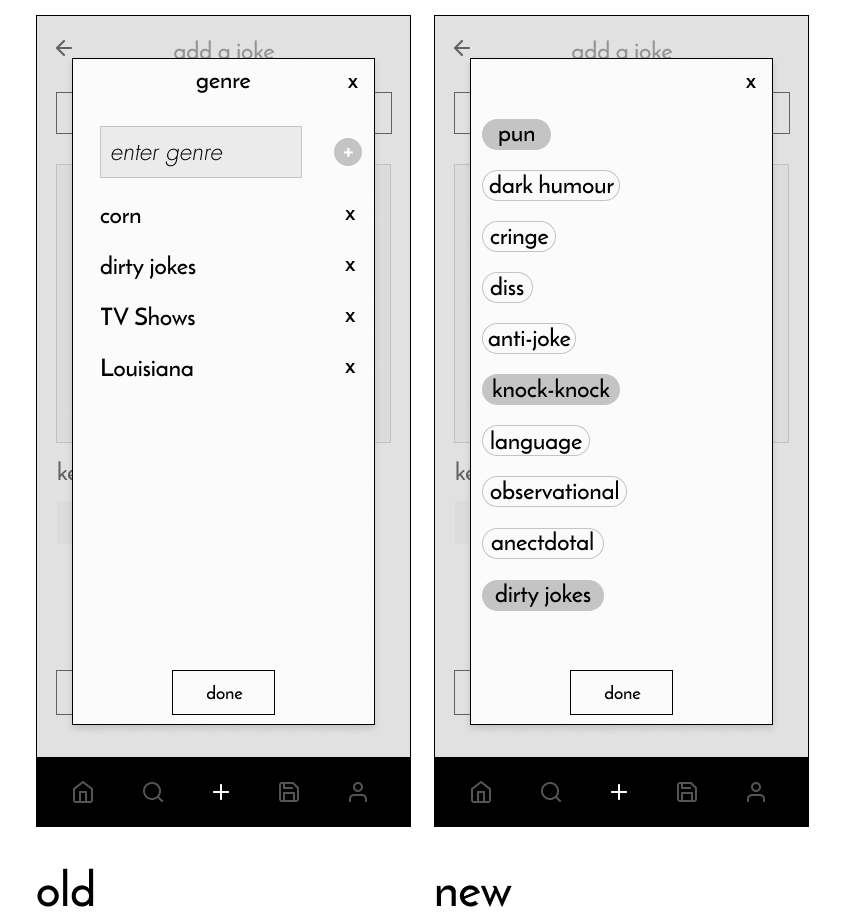 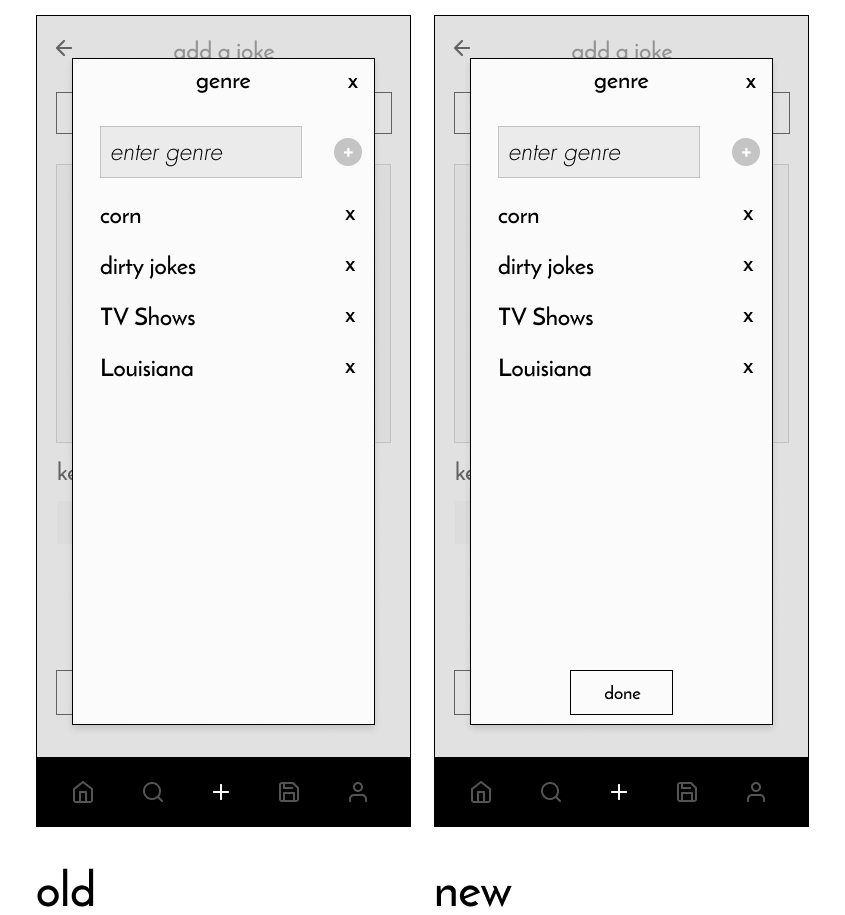 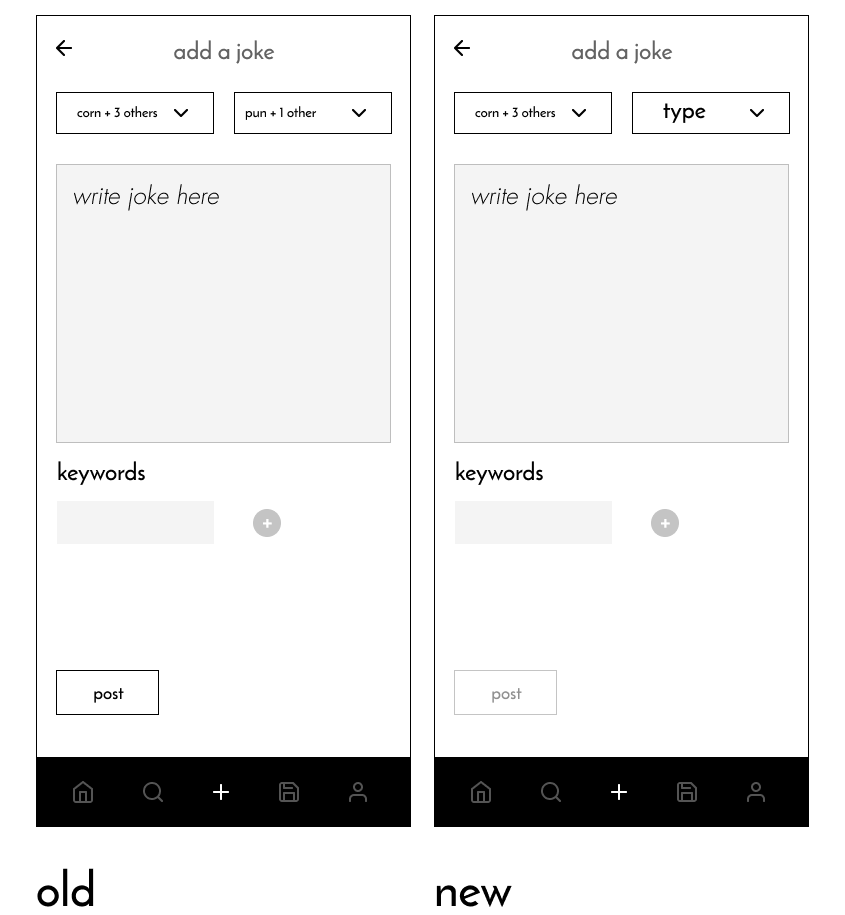 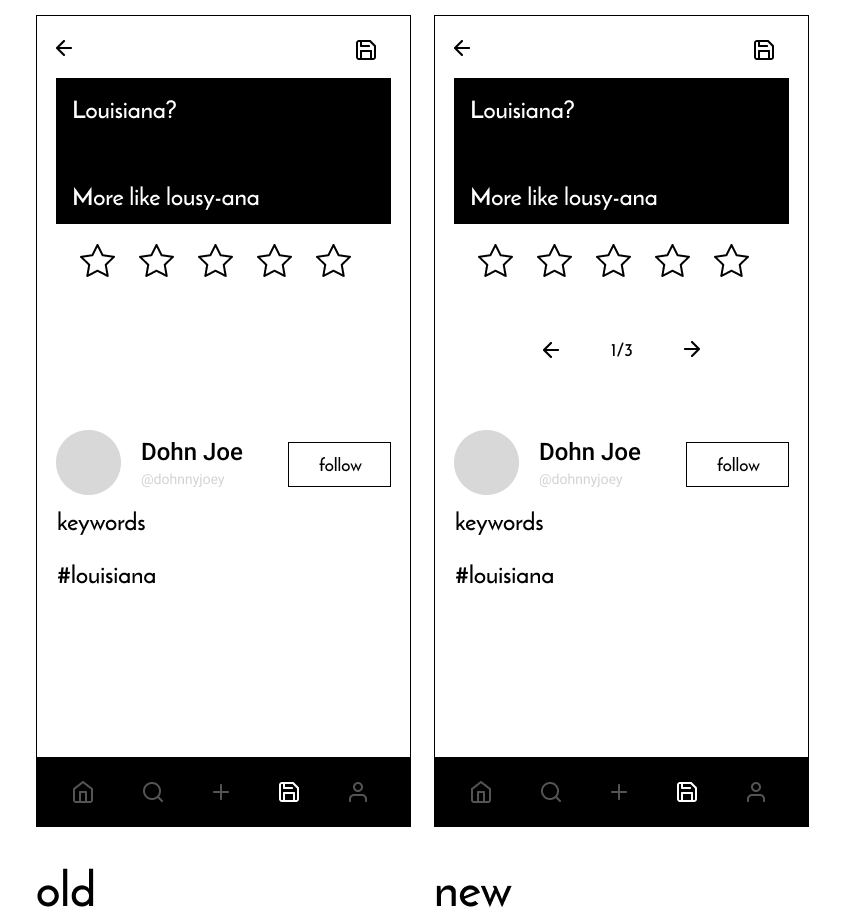 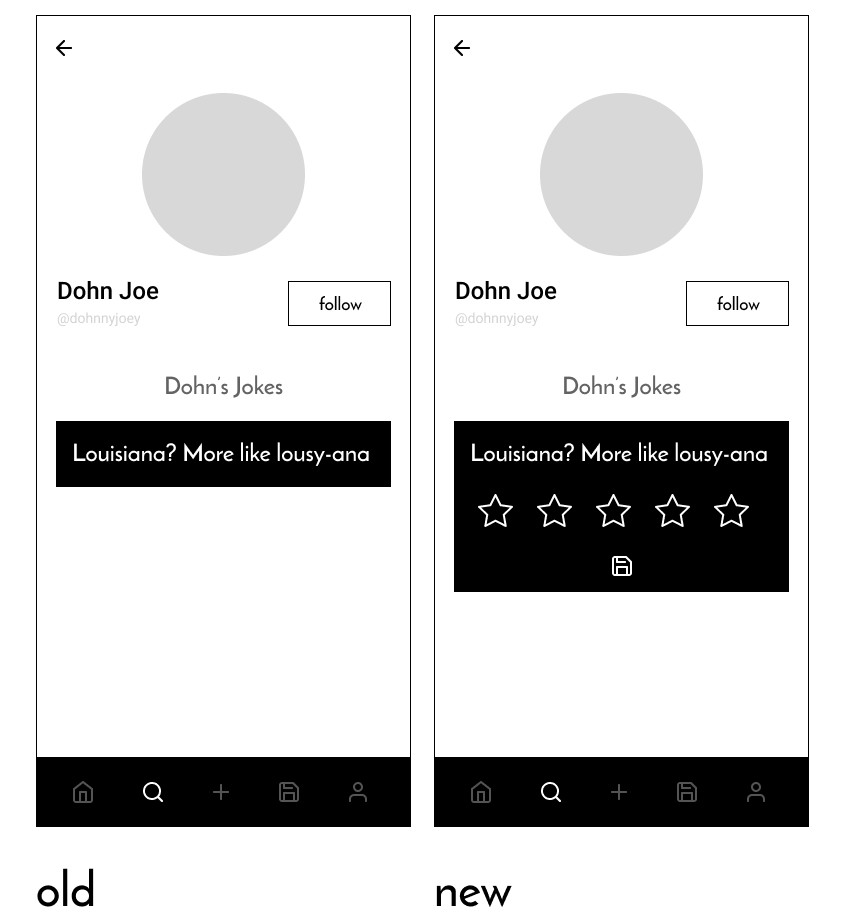 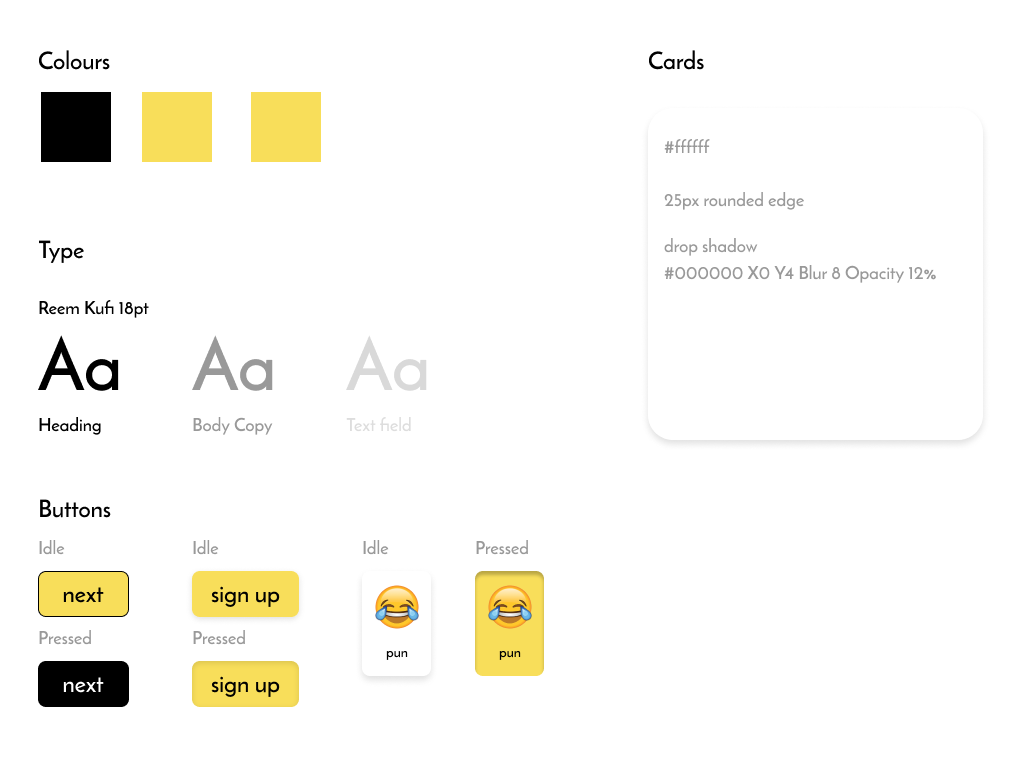 ↑
call me beep me if you wanna reach me at: ginzbergben@gmail.com